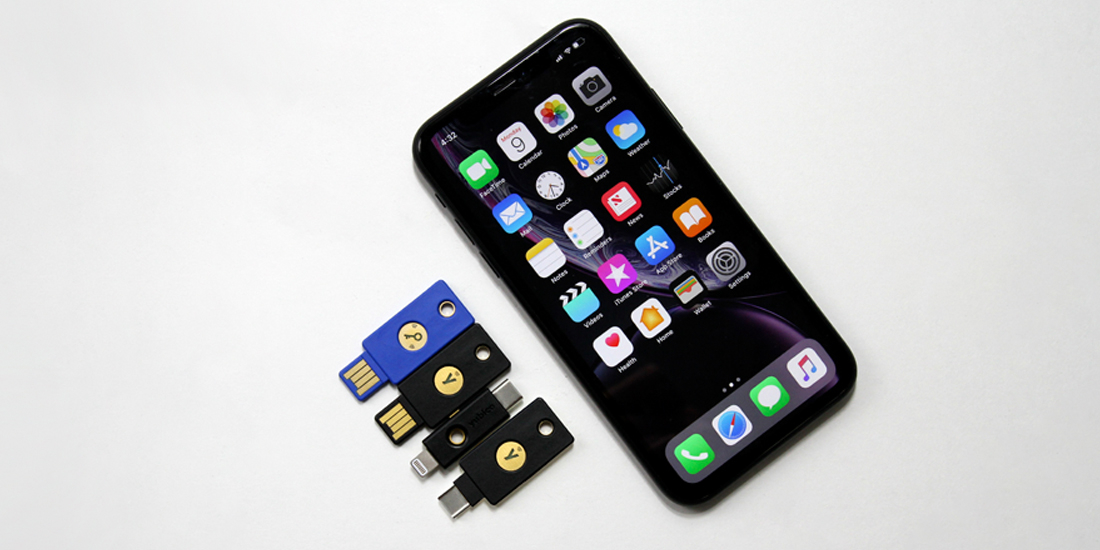 This week, at the annual September iPhone event, Apple introduced new functionality that allows the full range of YubiKey authentication on iOS via near field communication (NFC). This has been many years in the making, back in Oct 2017 we even wrote about when this day would come.

Previously, NFC on iOS was read-only, which meant that it couldn’t support modern authentication protocols like FIDO U2F, FIDO2/WebAuthn that require both read and write capabilities – but now that has changed. With these recent updates, iPhone users (running iOS 13+) can experience mobile NFC authentication with a YubiKey 5 NFC or Security Key NFC by Yubico on apps and browsers that have added support.

Coming right on the heels of our new YubiKey 5Ci, iOS users now have a broad and complete choice of secure authentication options, based on their preference and use cases. NFC-enabled YubiKeys will work with compatible apps and browsers on iPhones 7 or later running iOS 13. Older iPhone models, most iPads, and some iPods will work with the YubiKey 5Ci through its Lightning connector on select apps and browsers.

That’s not all. Based on feedback and suggestions from our customers (we hear you!), we are happy to announce a sneak preview of YubiKey 5C NFC, our upcoming USB-C security key enabled with NFC. This key will provide yet another authentication option for all environments supporting iOS, Android, Windows, MacOS, and more, all on one key. Arriving this coming Winter*, this new device will deliver the same multi-protocol functionality and user experience of the YubiKey 5 Series. Sign up here to receive updates on product availability.

This announcement supports Yubico’s long-standing YubiKey vision: to deliver secure hardware-based authentication across any operating system and platform. Our goal is to support all authentication use cases across any computing device, as we recognize that individuals use multiple phones, operating systems, laptops, tablets, or desktops each day to access work and personal accounts.

To coincide with this new NFC functionality, Yubico will also be rolling out updated software for end users and developers on iOS. On mobile iOS devices, users will soon be able to use the Yubico Authenticator application to communicate over NFC, USB and Lightning connection to generate a 6 digit, time-based code commonly used by many services for 2-factor authentication. This is similar to Google Authenticator, with the main differentiator being the user credential is stored on the external YubiKey, versus internally on the mobile device, making it extremely portable to get the one-time codes either on mobile devices and/or desktop computers.  We expect to introduce the new Yubico Authenticator for iOS in the coming months.

Developers who are interested in adding YubiKey support for desktop or mobile users, can access Yubico’s wide range of libraries on the Yubico developer site, including SDKs for Android and iOS app developers. We are also in the process of updating our Yubico Mobile SDK for iOS to support the new iOS NFC authentication capabilities. This will allow applications to implement modern authentication protocols such as FIDO2 and support the YubiKey over both Lightning and NFC connections.

*Due to current circumstances, we’re experiencing delays with the upcoming launch of the YubiKey 5C NFC. We’re working to get the key out as soon as possible, and appreciate your patience! If you’d like to be notified of updates, sign up here.