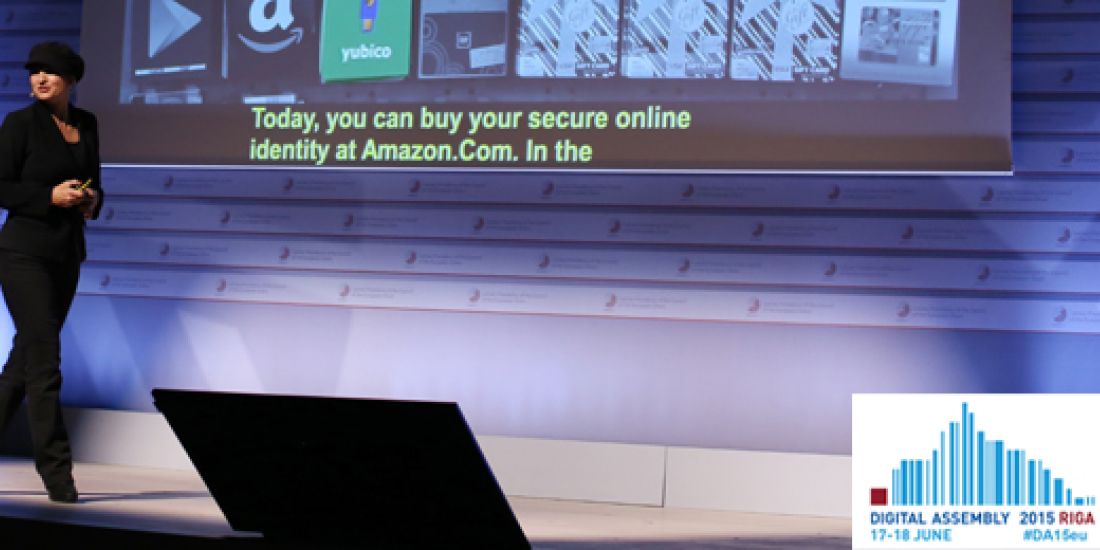 Trust has to be a cornerstone in order to protect the online identities of 500 million people doing business across borders, Yubico’s CEO and Founder, Stina Ehrensvard, told an exclusive crowd of 500 EU digital policy makers and industry representatives last week at Digital Assembly 2015 in Riga, Latvia.

She held up a single YubiKey and told the audience how its support of “new open internet security standards can help us to reinforce the trust for our internet. “

A who’s who of invited guests from across the EU were gathered at the request of the Latvian Presidency of the Council of the European Union to attend workshops and hear from six hand-picked inspirational speakers.

The Council of the European Union is an essential decision-making body that works together with the European Parliament to adopt legislation and coordinate EU policies.

The Digital Single Market Strategy for Europe, published by the European Commission early last month, framed the proceedings. The strategy aims to open up digital opportunities for people and business and enhance Europe’s position as a world leader in the digital economy.

Yubico’s Ehrensvard was the first inspirational speaker to take the stage (video below). She led the audience back fifty plus years to the invention of the three-point seat belt by her Swedish countryman Nils Bohlin, highlighting that its success was based on simplicity, unobtrusiveness and one-handed ease-of-use. It went on to become an open, global standard.

Fast-forward to today’s digital world, where she applied the same trio of traits to the YubiKey (although ease of use is accomplished with just one finger). She highlighted the weaknesses of other technologies: smart cards (complex), OTP devices (single purpose) and phones (vulnerable to attack).

She said standards are essential such as the FIDO Alliance’s Universal 2nd Factor (U2F) protocol for strong authentication, which is supported in Yubico’s YubiKey.  This emerging standard provides a way to share an authentication device across multiple services while maintaining respect for privacy, she said.

Her vision of the near future included the ability for anyone to buy a secure online identity based on U2F at a local convenience store from the same rack where the gift cards hang. Banks, governments, email sites, and healthcare organizations are among providers who would honor the secure identity.

She told the audience, “to realize the vision of a digital single market, the cornerstone is that we can trust the Internet.”

See the full talk below.